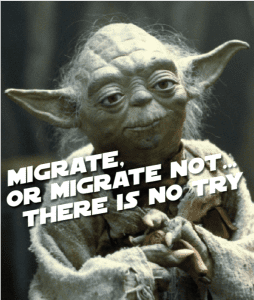 The last few months I have been busy with the migration from an outdated Cisco ACI environment to a brand new VMware NSX-T cluster. In the coming weeks I will make a few blogpost about this migration.

But let’s begin with the start. I will briefly explain how Cisco ACI works before I take you on my journey in this transition. [This is a simplification of how ACI works, but for this post it contains enough info. I’m not an Cisco ACI specialist so it’s maybe to basic for the real Cisco ACI end-bosses]

Cisco ACI is the micro segmentation solution offered by Cisco. The solution has many capabilities, but for this migration we only had to migrate the VMs which are located in the Cisco ACI environment.

All the ACI ESXi hosts were in a VMware vSphere cluster connected to a distributed switch which is managed by Cisco ACI. The VMs where al hosted on a FC SAN.

The picture below is the logical constructs present within ACI.

In short; EPG (End Point Groups) are a logical construct of VMs. These EPGs are represented within vCenter/ESXi as an distributed portgroup. The communication between these EPG is arranged with a contract. A contract is a collection of protocols/ports.

So the contracts are the glue between EPG’s to create micro segmentation. An EPG can be a Consumer or a Provider. If you translate this to the NSX-DFW you can see them as described below;

So to sum this up; you could have multiple tenants with multiple vrf’s containing multiple bridge domains with a collection af EPGs.

Now we have the basics outlined let’s tell you a little more about the current configuration of Cisco ACI with this customer.

Because there was already micro segmentation in place between the EPGs the main goal of this migration was to migrate as clean as possible from ACI to NSX without adjusting the firewall rules. Because the fundamental differences between ACI and NSX we had to be somehow creative to fix this.

Below a summarization of the things we needed to fix during the migration. I will only point out the points which are relevant.

So as you can see there are a few things which are not default to NSX. In my next post I will adres above points and the solutions we came up with.